“The truth, and the vulnerability of sharing it, is liberation.” 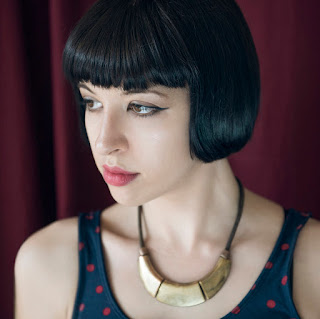 Robin Richardson is the author of two full-length collections of poetry, and is Editor-in-Chief at Minola Review, a Journal of Women’s Arts & Letters.  Her work has been shortlisted for the Walrus Poetry Prize, CBC Poetry Award, Lemon Hound Poetry Prize, and ReLit Award and has won the John B. Santorini Award and the Joan T. Baldwin Award. Her work has appeared or is forthcoming in many journals including POETRY, Tin House, Arc, The North American Review, and Hazlitt of Random House. She holds an MFA in Poetry from Sarah Lawrence College and BA in Design from OCAD University. Richardson’s latest collection, Sit How You Want, is forthcoming with Véhicule Press. She is represented by Samantha Haywood at Transatlantic Agency, who is working with her debut memoir this year.

A couple of weeks ago, Robin Richardson featured at the Art Bar Poetry Series. The atmosphere was warm and inviting, and the audience, full of young and old alike, was buoyed and uplifted by the superb quality and craft of Robin Richardson’s poetry. I had so many questions to ask Robin about her poetry.

In this Q&A, Robin Richardson talks about public and private life, what she values in a poem, her work in leading poetry workshops, and the biggest obstacle she faces as Editor-in-Chief at Minola Review.

One of Robin Richardson’s poems (previously published in Lemon Hound) that she read at the Art Bar Poetry Series:

I love your world, he said, just keep it to yourself
– I love your mouth.

In a Star Wars-themed fever dream
I saw him lassoed by a solar flare and held
there in a warmth I can’t provide. Blue light
clicking upon waking, wishing

caffeine came easy as a boy of twenty.
Think these sausages have feelings.
See them smiling from the skillet, soaking
olives plucked in Florence by a sun-fold crone.

Wish I’d been there popping bottles
of Prosecco by the boastful shadow
of that lady. Can’t fake mornings undone
by a brain as overanxious as a surgeon

with a bone to pick. One busted nose
and I keep thinking it’ll shift again, fall
off: some stupid uncle’s magic trick
gone wrong: I got your nose, I got your nose!

He got me hooked on the illusion I was whole.

LY: On CBC's Canada Writes website, they call your forthcoming collection, Sit How You Want (Véhicule Press), your most personal collection yet. This comment seems to point to a marked change in your poetry, whether one calls it more personal, or simply carrying a new flavour or energy. Would you agree that your poetry has taken on a different aspect? And if so, can you pinpoint any one discovery that might have led to this change?

Robin Richardson: There has been a tremendous shift over the past five years. I came out of a sort of fog through which I had been feeling my way, half consciously, through writing, aware of what I wanted to avoid, and what mood I meant to relay, but unable to see myself or my work with any clarity. The shift happened after I removed myself from a particularly impactful and volatile relationship, and began to explore my own instinct about work and self, as unencumbered as I could get, by the influences of opinionated men. Once I was no longer motivated by fear of disapproval, my own voice began to reveal itself with increasing force. It became clear I value honesty, directness, and a certain gut level, unsympathetic writing that exposes elements of the self and the experience of life in order to create intimacy between myself and the reader, and thus, ideally between the reader and her world. It’s clear now that the fancy footwork popular within contemporary Canadian poetry isn’t me, nor the embellishment or showmanship of ambiguous wordplay. My writing is best when it is direct, unflinching, when something is at risk.

I can also point to two things that helped this development along; the one having been my time at Sarah Lawrence College in the States, where a certain directness is revered, and the other being my reading of Leslie Jamison’s The Empathy Exams, which proved exposing oneself could be an effective and frankly brilliant way to expose the world at large, if done well.

LY: “Come In and Get Lost,” which is one of the poems you read at the Art Bar recently (and also one of the poems featured on your website), is so full of life, beauty and drama. Could you share with us your experience of bringing this poem to fruition?

Robin Richardson: Thank you. This poem began with a preoccupation with money. I was living in Brooklyn when I wrote it. I shared a two bedroom flat with four people, and spent my evenings throwing money I didn’t have at experiences I felt somehow entitled to. I was also reading a lot of Frederick Seidel. Seidel, for those who don’t know it, is a poet famous for his ghoulishness and for his rumoured multi-millionaire status. They say he lives at the Carlyle Hotel. Seidel writes of his wealth openly and flippantly, flaunting it as if it were the most natural thing in the world. In the poem, “Come In and Get Lost” I imagine myself intruding upon Seidel’s world, dressed up in my “knockoff goddess garments”, “a forgery so skillfully constructed it outdoes the real thing”. I do not belong and yet by the end of the poem my intrusion becomes a kind of conquering. There is power in honesty. There is power in mask-wearing too, in playing at being something I am not in order to better discover what I’m capable of becoming. The poem moves through the seeming supremacy of monetary wealth to an epiphany of the power of being unabashedly engaged in my own ever-shifting truths. The poem is also a nod to artists like Beyoncé, Nicki Minaj, ​Leikeli47, and Lorde, whose bravado brought out a similar tone of empowerment in my own voice.

LY:  In terms of your Unsympathetic Poetry Workshops, what are some of the key factors that have helped you create a productive and safe environment for your participants? And have you been tempted to run a “no-boys-allowed dance party” writing workshop?

Robin Richardson: The biggest contributing factor in creating the environment I have with the workshops is my sovereignty. I know that sounds extreme but the power to facilitate and lead the workshops without oversight allows me to create a controlled environment according to my own vision. Participants in my workshops are generally newer poets, or prose writers, curious about poetic practices. My approach to the workshop is to be open-minded, to zero in on the strong possibilities of a given poem and find ways to draw out those strengths, to format the work to best serve its own, often somewhat hidden truth. There is never talk of disliking a poem, only talk of what the poem is capable of. I find that by leading with this example the participants very quickly follow suit. Conducting themselves in an encouraging, enthusiastic manner.


As for gender one of my favourite things about these workshops is the effect they have on the men who participate in them. On average, in a workshop of about 8 participants, 2 will be men; the rest are women. I have seen men reexamine their work based on illuminating feedback from women on the gendered experience of the work. There are few things more thrilling than witnessing a moment of epiphany as one puts to question one’s previous presumptions and begins to see things in a new light. Again, I think this is mainly due to the freedom I have to monitor the room on my own terms. I have of course seen workshops run by less conscientious facilitators that devolved into bullying or seemingly endless exchanges of misunderstandings. There is an art to facilitation and I believe that the trick to a nurturing and effective workshop is the mastery of that art.


LY: I've always been fascinated about that line writers draw or don't draw between their private and public lives. What kinds of issues have arisen for you around this topic?

Robin Richardson: For me the public and private are irrevocably intermingled. The poetry is exposing, sure, but I’ve also started work on my memoir, which exposes the most intimate aspects of my upbringing and personal life leading up to present time. The more I expose, the more I feel I’m doing justice to my personal aim in writing, which is to connect on more meaningful, truthful levels with other human beings. I want the reader to know she is not alone and the surest way to do this is to reveal those aspects of the self we most often conceal and thus hold us in isolation. For me this isn’t scary. Lies are scary. Secrets are scary. The truth, and the vulnerability of sharing it, is liberation.

LY: Minola Review is growing in leaps and bounds, ever expanding its reach. What do you think is the biggest obstacle you will face in the years to come as Editor-in-Chief?

Robin Richardson: Funding! I want more than anything to be able to pay contributors, publish international writers, and make the work available both online and in print. These criteria make government funding near impossible, as most councils demand about 80% Canadian content, among other requirements that limit the liberties I believe Minola Review thrives with. As a solution to this, I have taken to crowdsourcing via a Kickstarter campaign that is running from now until mid-November. Our goal is to raise $5000, which will enable us to pay contributors, and create a print anthology, which (fingers crossed) will perpetuate enough funds through its sales to fund the same thing in the following year and so on. Each contribution is a pre-order rather than a donation. So each contribution gets one a copy of the anthology, as well as signed art and poetry, depending on the amount given. We’ve already reached 40% of our goal, so I am very optimistic we’ll succeed at this.

The other challenge one might think of for a woman’s journal would be pushback from MRA types. Thankfully there has been much less of this than anticipated. I can count on one hand the men (and one woman) who have criticized the mission. Overall the support and enthusiasm has been swift, and enthusiastic. There is clearly a great need and it’s encouraging to see how supportive the literary community is to the promotion of such a conversation.