A collage and a book launch...

﻿﻿
I know my book launch isn't until November, but it's starting to feel like it's getting very close all the same. I don't usually make collages – however – I decided I'd "get out" all my anxiety about the launch by putting it into picture form. It was a great relief somehow. So here it is for your general entertainment.


I continue to be taken by Julia Cameron's writing. The book I have of hers now is called, The Sound of Paper. She's the one who "believes" in collages. She has interesting exercises in her book including one where you write about yourself in the third person – distance yourself and write yourself as a character. I've done this exercise once before. I tried it again today and I seemed to be just a little more honest the second time around. It's amazing how I edit myself as I write – well I can't say this or that – and let's not get maudlin or overly dramatic, and let's not make everything sunny and bright either.

I'm excited about some upcoming events – including Quattro's relaunch of their reading series WordStage on September 14 at Dooney's Cafe. Dani Couture has a launch coming up for her new novel, Algoma, on October 12 at the Gladstone Hotel...it's going to be a busy season. Happy September everyone!

Here's my invite for my friends and colleagues who are interested in coming to my launch: 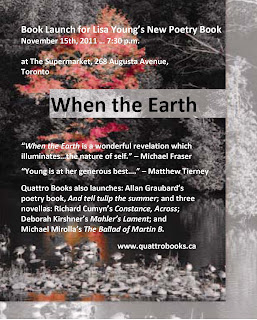