“I didn’t have to challenge myself. Numerous challenges emerged on their own.” 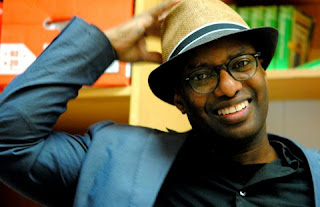 BIOGRAPHICAL INFO: Michael Fraser has been published in numerous national and international anthologies and journals including: Paris Atlantic, Arc, CV2, and The Caribbean Writer. He won ARC’s Reader’s Choice award for 2012, and was included in the Best Canadian Poetry in English 2013. He won FreeFall’s 2014 and 2015 Poetry Contests. His latest book is To Greet Yourself Arriving (Tightrope Books). He is the creator and former director of the Plasticine Poetry Series.

Michael’s second collection of poetry To Greet Yourself Arriving was recently published by Tightrope Books. As the title suggests, this collection explores self-awareness, fragmented selves, and the best self. Some of the poems are portraits of people who have accomplished rare achievements, such as Bob Marley, Joe Frazier, Maya Angelou and Barack Obama. With each poem, the reader is immersed in rich imagery and surprising metaphors. To Greet Yourself Arriving is a complete journey: both uplifting and sobering. 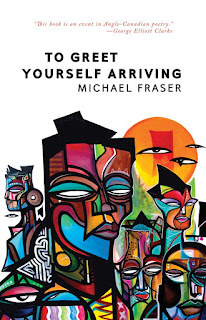 Like a child, he craves firefly glitter
suspended beneath his neck.

He wants coins, gold patina skin. To have
that metal taste drifting between his teeth,

the heat of concentration like a magnifying
glass searing paper. His obsession

with an unwinding track rounded to infinity.
If moments are distances between places,

a clock pulsing through rain, snow
and slow boredom, trying to place brakes

on time, to outdistance other men living
between lines. The ground is a spring his

ankle fears. He rips down the straightaway,
holding off gazelles cloaked in wind.

LY: What has been the most rewarding aspect of publishing your second poetry collection, To Greet Yourself Arriving (Tightrope Books)? What are some of the highlights of your experience?

Michael Fraser: The most rewarding aspect is holding the book in your hands for the first time. The notion of your book is essentially abstract until you open it and flip through the pages. You enjoy the pages’ texture and peruse it like a child who has just unwrapped a birthday present. You admire the font and cover, and literally, playfully, and gleefully wade through this concrete, bound collection of your thoughts and perspectives on the world. Equally important are the eight years between this book and my first collection, The Serenity of Stone. I know I have more books in me, but life really interrupted the momentum I gained from publishing the first book. Thus, I was thrilled to have finally published this manuscript which I laboured over the previous seven years.

One major highlight was working with Deanna Janovski at Tightrope Books. I have copious praise and unending accolades for Deanna Janovski. I saw her previous book covers and deferred to her expertise and experience. I had 110% confidence in her capability and vision. I was waylaid when she initially shared an image of the front cover. I returned her email with a plethora of happy emoticons and every adjective for the word “amazing” I could muster. It was quite juvenile and unprofessional, but I was beyond elated! Deanna was also a master copy editor. Guess Who’s Coming to Dinner by Black Uhuru was one of my favourite songs during my impassioned adolescence. For most of my life, I sang the lyric “so the Book of Ruth shall stand”. I included this line in the poem referencing Black Uhuru. I was surprised when Deanna wrote back stating the lyric is “so the Book of Rule shall stand,” and she was correct. I couldn’t believe I spent most of my life singing incorrect lyrics from a song I heard a million times! It was hilarious.

LY: In what ways did you try to challenge yourself while writing To Greet Yourself Arriving? What was your writing process?

Michael Fraser: I didn’t have to challenge myself. Numerous challenges emerged on their own. I commenced this project immediately after I completed The Serenity of Stone. My daughter entered our world a few months later, and I immediately realized time is most definitely our greatest resource! Writing anything was ridiculously difficult as my daughter seemed to cry continuously whenever she was awake. The first three months were brutal. I felt like a creature from The Walking Dead. Any writing attempts were disjointed and beyond amateurish. Writing returned in spurts when she was roughly six months old. I discovered Hemingway was correct when he claimed the subconscious works on our writing while we’re not writing or even contemplating writing. I essentially tried to write and read whenever a moment presented itself. I wrote surreptitiously during meetings, the occasional time I took public transit, in the midst of movie theatres.

The book’s title presented a serious challenge and went through various incarnations during my seven years writing the book. Walcott’s Love After Love is one of my favourite poems and the light clicked when I listened to a YouTube recitation of the poem while cleaning. To Greet Yourself Arriving was the perfect title that had eluded me the previous seven years. It’s a perfect title since Love After Love focuses on loving oneself prior to loving others. This mirrors the African diasporic experience since media and society have constructed “blackness” as something to be despised and hated. We, as diasporic African peoples, have imbibed this hatred and continue to further entrench it amongst us. I believe it was Junot Diaz who said if every “white” person was to magically disappear off the planet tomorrow, white supremacy would continue as normal since it’s heavily ingrained and embedded in our society and our collective consciousness. If you’re from the , you’re fully cognizant of this. Colourism/Shadism is completely in effect as you ascend the social-economic ladder. We know who has “good” hair versus “bad” hair, who has a “good” versus “bad” complexion. The “White doll versus Black doll” experiment which was initially conducted in the early 1960’s demonstrates how pervasive and damaging societal constructions of “blackness” are. In the experiment, three and four year-olds are presented with a black doll and a white doll. They are asked, “which doll is the good doll, and which doll is the bad doll.” Every single preschooler (regardless of race, ethnicity, religion, gender, ability, etc.), selected the white doll for positive traits and the black doll for negative traits. You can easily observe these experiments on YouTube. These experiments literally make people cry. I think everyone should see them, especially people who claim we’re in a post-racial world. When you see a “Black” toddler or preschooler repeatedly point to the black doll as being bad, stupid, untrustworthy, ugly, unfriendly, sad, angry, dangerous, etc., it breaks your heart. It completely disembowels you. I had all of this in mind, and the multi-billion dollar skin-whitening business, in mind when I decided on the title To Greet Yourself Arriving, because we, as African Diasporic peoples, must learn to love ourselves again after centuries of physical and psychological degradation enacted by our Western European colonizers.

Editing also presented a challenge because, in the end, we excised roughly 40 poems from the first manuscript draft! George Elliott Clarke illustrates in the book’s introduction that I failed to write poems for Melvin Tolson, Gwendolyn Brooks, and Amiri Baraka. Truth is, I did write poems about these excellent poets; however, the poems I penned weren’t worthy of the poets and were not included in the collection.

LY: Were there any specific books that you were drawn to reading while working on To Greet Yourself Arriving that influenced and informed your writing?

Michael Fraser: While the book profiles historical figures, it is not a history book. Thus, I had no burning desire to extensively research the African diasporic figures showcased in the book. I’m presenting individuals who are special to me. I want to capture something visceral about each individual. I try to envision their struggles from their eyes, or from a third-person omniscient perspective. Perspective was another contentious issue. For people who are still alive like Michaëlle Jean, I had to ask myself, should I really write her poem in first-person perspective? You can envision all the land mines and rabbit holes first-person perspective is capable of generating with such an ambitious project.

LY: As an educator and writer, how important do you think it is to have many interests? Do you have any hobbies or passions that would surprise your readers?

Michael Fraser: As I journey through life, the importance of having multiple interests intensifies. I remember having the “if you won $10 million dollars what would you do?” conversation with coworkers eons ago, and a few answers shocked me. One person claimed they’d eventually return to work because they’d be bored with all that free time. Can you imagine?

I believe it’s necessary and healthy for everyone to have copious interests. You become a more balanced person if you have various interests. I assume teachers with varied interests are more dynamic educators and perhaps have access to a wider range of experiences which can enhance their teaching. Additionally, having multiple interests introduces one to new social circles and people, which is always a positive thing. I read that language and musical acquisition improve fluidity between left and right brain hemispheres. Thus, I’m determined to learn Spanish and I’ve acquired a guitar. We live in a golden age of information. You can literally learn to play guitar from YouTube instructors and language programs are ridiculously dynamic and advanced these days! For the curious and those driven to learn, the world is truly their oyster.