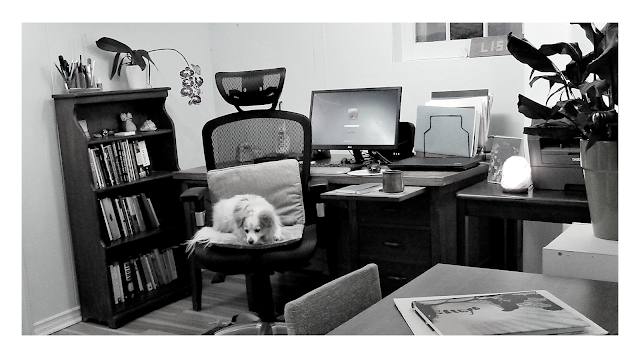 MY TYPICAL WRITING DAY? WELL, IT USUALLY STARTS IN THE MORNING

But today it didn’t. And come to think of it – it is rare to get to the page every morning – but that is the aim. Before I run out of energy, time or inclination, I like to schedule writing time at the beginning of the day. But I had to go to an appointment this morning, so writing was delayed till the afternoon.

THERE IS SO MUCH HOPE NESTLED IN MY PLAN TO WRITE

But when it finally comes down to putting pen to page – I’m already doubting how much can be done. I mean writing isn’t a linear journey. It’s not as if I can plan to write a poem in an afternoon – writing has a mind of its own – or at least poetry does.

There seems to be a contradiction at work when it comes to putting aside time to write. Even a half hour devoted to writing makes a huge difference – but in the same moment I’m appreciating that I’m able to prioritize writing in my day – there’s another spiny part saying writing takes forever and there never is enough time.

NO ALARM IS SET

Breakfast in the living room with my husband Mike – we talk leisurely – we like to savour this time. Sometimes long talks ensue and we read to each other. Then chores. Then the day proceeds around me as I write.

MY DAY CONSISTS OF JUST KEEPING MY HAND IN

I gather words, fragments, and entry points into what hopefully will become a poem at some point. When there is no sense of urgency and no new draft to work on – I’m kind of skulking around for the next thing.

At some point during a day – I have a plan to write, to read, to get the fires burning again. Of course that doesn’t always happen.

WHEN SOMETHING DOES CATCH FIRE, I RUN WITH IT

I often want to table all my responsibilities and just write for a few days straight – but I never plan it – it just happens.

The other day I was innocently coming to a dead end with a poem. I’d been trying “to gather a poem,” compiling word lists, trying different forms, rhythms, and I was just about to give up. I can’t write this. It’s not happening. It was about 10 a.m. and Mike was headed to an audition (yes, an actor and a writer in one household!) and I read him a poem (not one of mine) from a favourite anthology. And then somehow this poet’s poem gave me permission to write what I needed to write. The whole first draft poured out in a few minutes. I was so elated and surprised and then I did table everything else in my life to spend time with this draft and complete it. I spent all day – and all night till about 5 a.m. in the morning working on it.

being driven by
a poem is a
bumpy ride

THERE’S ALWAYS SOMETHING IN THE WAY

Chores present themselves and so does my freelance work, so sometimes I don’t set to dabbling/scribbling/musing until late afternoon.

I close the bedroom door, saying not now, when asked to walk the dog.

night darkens the room,
maybe we should enjoy it:
Friday wine awaits